Unidentified bolts from the blue

Harmless apparition or hypersonic hardware?’ We take a peek at the latest US Navy intelligence report on UFO activity

The long awaited research study by the US Office of Naval Intelligence into ‘Unidentified Aerial Phenomenon’ (UAP) was made public on 25th June 2021. The Pentagon report is an indication that the security threat presented by UAP (more commonly known as UFOs) is being taken more seriously by the US Government.

First off, many people are confused by the new acronym UAP, but the distinction between UFO and UAP is really quite simple: An ‘Unidentified Flying Object’ refers to a solid, nuts-and-bolts, physical object, like the silver flying saucers we’ve all seen in B-movies. ‘Unidentified Aerial Phenomenon’ on the other hand, encompasses more ethereal matter including smoke, cloud, and other intangible optical effects. Now we’ve cleared that up, let’s move on…

In this new study, the UAP Task force categorises incidents as follows;

Adversaries and unknowns are of greatest concern particularly if they are of the solid variety, (good old fashioned UFOs).

Over a six-month period, there were eighty incidents where the presence of a physical object was verified by multiple aviation sensors, 18 incidents where the object exhibited unusual flight characteristics, and 11 near misses with observer aircraft. With pilots travelling at supersonic speeds, a nuts-and-bolts collision with one of these objects would be fatal. These concerns extend beyond military operations, as commercial airlines are also aware of near-misses.

The term ‘unusual flight characteristics’ is a bit of an understatement, since it describes speeds and manoeuvrability way beyond the capabilities of current fighter aircraft, materials, technology, and human endurance. The G-forces generated by some of the UFO manoeuvres would kill a pilot and tear our best aerial hardware apart, so could there be some anti-gravity control at work here? 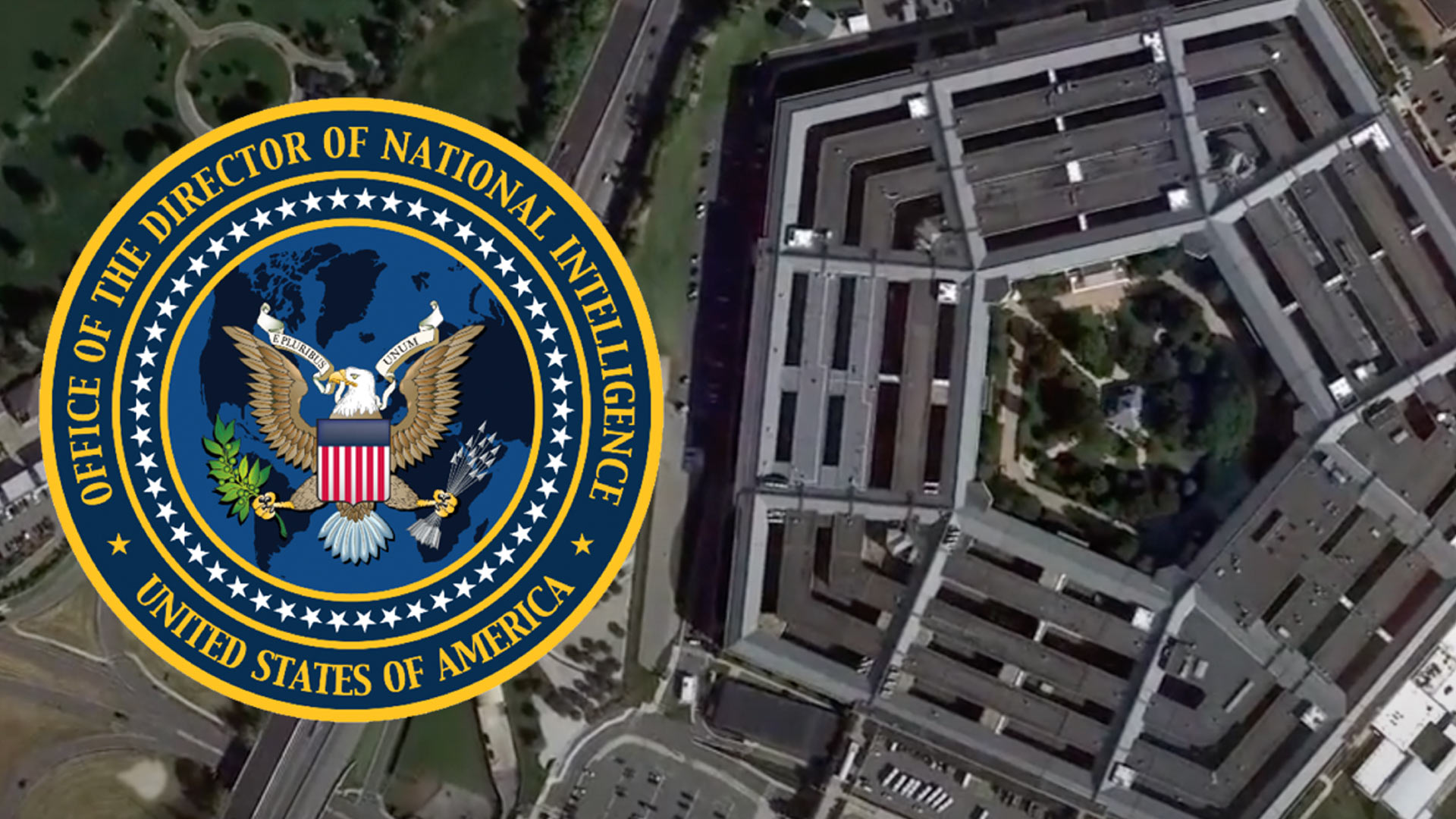 United States of America, Office of the Director of National Intelligence seal, and aerial view of The Pentagon.

Sociocultural stigmas associated with flying saucers and UFO phenomena mean that few pilots actually report incidents as they could compromise their professional standing. However, improved telematics and image capture do make incidents more difficult to dismiss. Several navy pilots who have talked openly about their experiences have done so from the safety of retirement. It is surprising that these eyewitnesses are not subject to gagging orders. The new disclosures beg the question ‘why now?’ What is the motivation for releasing this information at this point in time?

Video footage made by fighter pilots in 2004 has been in the public domain since 2017. This ‘Preliminary report’ by the US Office of Naval Intelligence adds no further detail about these close encounters. The Navy does admit to there being a lack of counterintelligence to suggest these incursions could be advanced technology under the control of a foreign power or commercial entity. Equally, there is no hint that these objects might be extraterrestrial. Previous testimonies have described objects emerging from under the sea, then accelerating to thousands of feet in the air. Whilst these claims seem plausible, there have been doubts about the reliability of onboard sensors or the suggestion that pilots may have been fooled by visual parallax and the so called ‘bokeh’ lens effect. If you’ve ever pointed your mobile camera lens at a bright light, then you will know the effect the report is referring to.

This report does confirm that incursions have been verified simultaneously by infra-red cameras, radio frequency, and radar. This data has also been recorded concurrently by air and marine craft. Then, of course there are the eyewitness accounts from pilots who have attempted to lock-onto the objects with weaponised camera technology and given chase. The implications of releasing a weapon even accidentally, doesn’t bear thinking about. The report does not reveal any more detail of specific cases of these aerial incursions as the US Navy pilots were engaged on live missions at the time, and detailing their exact whereabouts and other metadata would compromise national security.

The report summary advises greater co-operation between US government departments and recommends further research funding, including the use of artificial intelligence (AI) to map aerial phenomenon more widely. It is interesting that this report on aerial phenomena has been published by the US Navy rather than the US Air Force who remain tight-lipped about any UAP reports that have been filed by their pilots.

We are curious about why the report is being released now and what kind of data trail it creates as it is consumed across the internet? Having downloaded the report, I have revealed my interest in the subject, but to whom? Has my data been harvested and then aggregated with members of the conspiracy theorists Q-Anon? Am I now on a watch list? Are readers being softened-up for a big reveal, or is this simply a huge departmental gaslighting deception to keep us off the scent of the real deal? This report raises more questions than it solves.

It seems likely that other nations are conducting their own research into UAP. Imagine the strategic advantage of acquiring hypersonic, anti-gravity technology. Earlier this year, a Freedom of Information (FOI) request concerning UFO reports was dismissed by UK Government who chose to publish their response on the .GOV UK website on 1st of April. It is not known whether this posting was intended as an April fool’s joke, or was a deliberate attempt to discredit a perfectly reasonable FOI request. The incumbent administration is no stranger to using humour and controversial quips to trivialise important issues, so I’ll leave you to decide.

In truth, we still don’t know very much about what is really out there?

One of three US military videos of UAP that has been through official declassification review by US government and approved for public release.